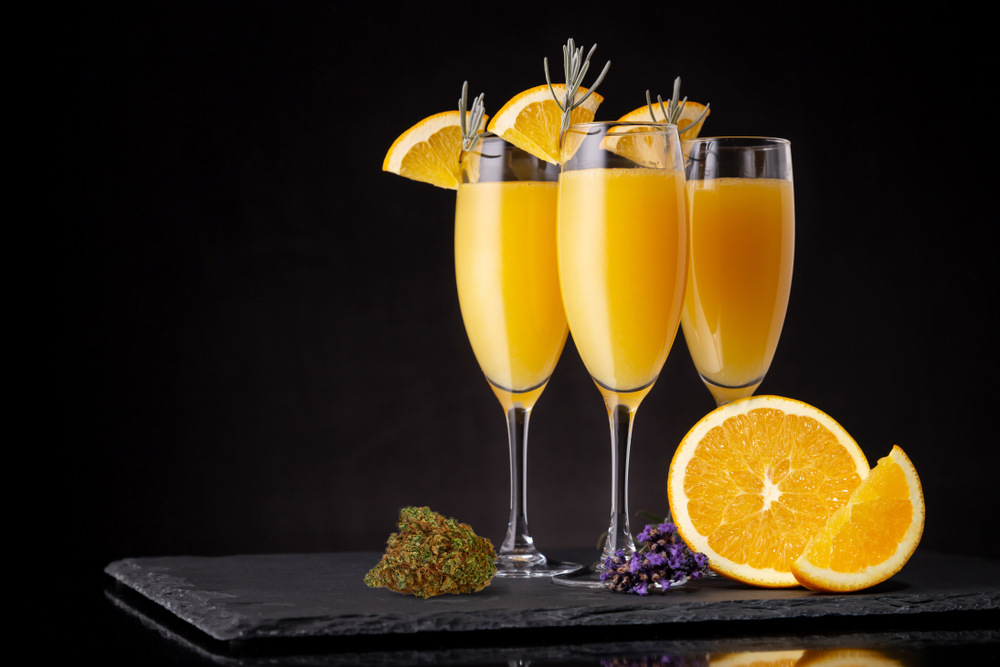 Mimosas may be magnificent for brunch, but they aren’t the best “morning buzz” on the weekdays. When you want to feel perked up without getting tipsy, you may want to swap those chilled drinks for a few cannabis nugs. OK, smoking a Mimosa hybrid isn’t the same as sipping alcoholic OJ, but many tokers have been taken aback by this terrific tangerine-tasting strain.

If you’re finding it difficult to bust through morning fatigue, Mimosa may be a cannabis hybrid to consider. With its strong sativa genetics and tasty orange flavor, this hybrid never fails to deliver a head-rush sensation.

Mimosa is a classic Cali strain from the masterful breeders at Symbiotic Genetics. Nowadays, it’s almost a requirement for self-professed “cannasseurs” to have tasted at least one of Symbiotic Genetics’ legendary hybrids. In addition to Mimosa, Symbiotic Genetics is responsible for dozens of influential hybrids, including Wedding Crasher and Banana Punch.

Virtually all Symbiotic Genetics strains rely heavily on a Purple Punch male phenotype the company claims to keep in its cultivation chamber. To give Mimosa its distinctive orange scent, the Cali breeders crossed their Purple Punch with the citrusy strain Clementine.

Mimosa first spread in California in the late 2010s, and it has since become a standard sativa strain in cannabis dispensaries. Most Mimosa hybrids have a 70 percent sativa dominance, plus THC percentages in the 20 percent range. However, don’t expect high traces of CBD when smoking well-cured Mimosa flowers. Generally, Mimosa has ≤ 1 percent total CBD content.

Since Mimosa is an intense sativa strain, it’s not a good choice for people who have zero THC tolerance. Even if new users microdose Mimosa buds, it could be a bit too potent — especially on days where you need to be super productive. It’s far safer for new tokers to test low-THC sativa hemp flowers like those in Cannaflower’s portfolio. While these CBD-rich nugs won’t get users “high,” they can provide a satisfying buzz while on the job.

Mimosa’s name perfectly describes its standard citrus-forward flavors. No matter who’s growing Mimosa cultivars, this strain should have a high concentration of the terpene limonene.

In cannabis circles, limonene is often associated with gasoline strains like Sour Diesel, but this terpene also has a sweet side. Indeed, it’s rare for Mimosa smokers to report “industrial” or “gassy” notes, even with Mimosa’s high limonene concentration. Instead, Mimosa hits users with a pronounced “sweet orange” aroma with a hint of fresh berries.

Arguably, the presence of Purple Punch helps taper back limonene’s sharp citrus notes by adding fruity terpenes like myrcene. Also, many people who taste Mimosa say the pronounced citrus and fruit flavors have a soothing, woodsy undertone. As tokers gain more experience with Mimosa, they may also pick up nuanced floral flavors thanks to moderate traces of linalool.

How Does The Mimosa Strain Feel?

In addition to giving tokers a preview of this strain’s flavors, the name “Mimosa” clues users in on when to smoke this strain. Like the brunch beverage, Mimosa is a strain that’s best smoked early in the day.

There’s no question Mimosa leans heavily on the sativa side, which means tokers will experience more “heady” effects like euphoria and “temple tingles.” People who smoke Mimosa often feel a sense of vigor and “zest for life” after taking just one hit. This makes Mimosa a fantastic strain for people who struggle with a lack of motivation, depression, or fatigue.

Keep in mind that high-THC Mimosa can interfere with productivity if you’re not dosing it properly. Only people with a strong THC tolerance should even think of microdosing Mimosa on a day when they need to get work accomplished.

People who struggle with fatigue are often intrigued by Mimosa’s energizing properties. However, new customers should remember this marijuana hybrid has heavy traces of THC. People who aren’t prepared may feel paranoid rather than pumped even after one sip of Mimosa nugs.

It’s safer to experiment with high-CBD hemp hybrids that mimic Mimosa’s effects. Since Cannaflower’s sativa strains have ≤ 0.3 percent delta-9 THC, they provide a gentle, uplifting impact without overwhelming a person’s ECS. Check out a few hot hemp strains like Lifter and Sour Space Candy to see how Cannaflower could improve your morning routine.