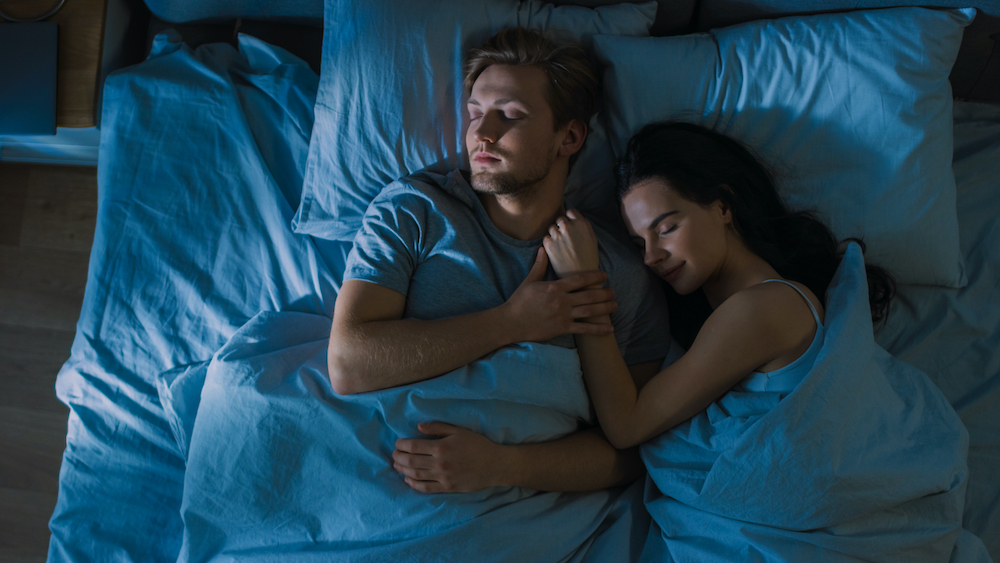 The Search for Quality Sleep​

Quality sleep has become increasingly elusive in our tech-savvy society. Recent surveys suggest 68 percent of Americans have serious issues falling asleep once per week. Even more alarming, at least 50 million Americans have at least one medically-recognized sleep disorder.

As more people struggle to get the recommended seven hours of shuteye, it’s no surprise CBD for sleep has been trending on social media. Interestingly, about 10 percent of people who try CBD claim they use it primarily for better sleep. There’s also increasing interest in smoking CBD flower to help de-stress after a long day.

Although there’s still a great deal we don’t know about cannabidiol (CBD) for sleeplessness, preliminary research suggests this cannabinoid might have great potential. Anyone who suffers from sleepless nights might be interested to learn the latest research on CBD flower for sleep.

Before going any further, please remember the FDA has not evaluated any of the medical claims made on this website. All of the info we share on CBD for sleep is not intended to treat, cure, or diagnose any condition. If you have specific questions about trying CBD flower, we suggest speaking with a medical professional. 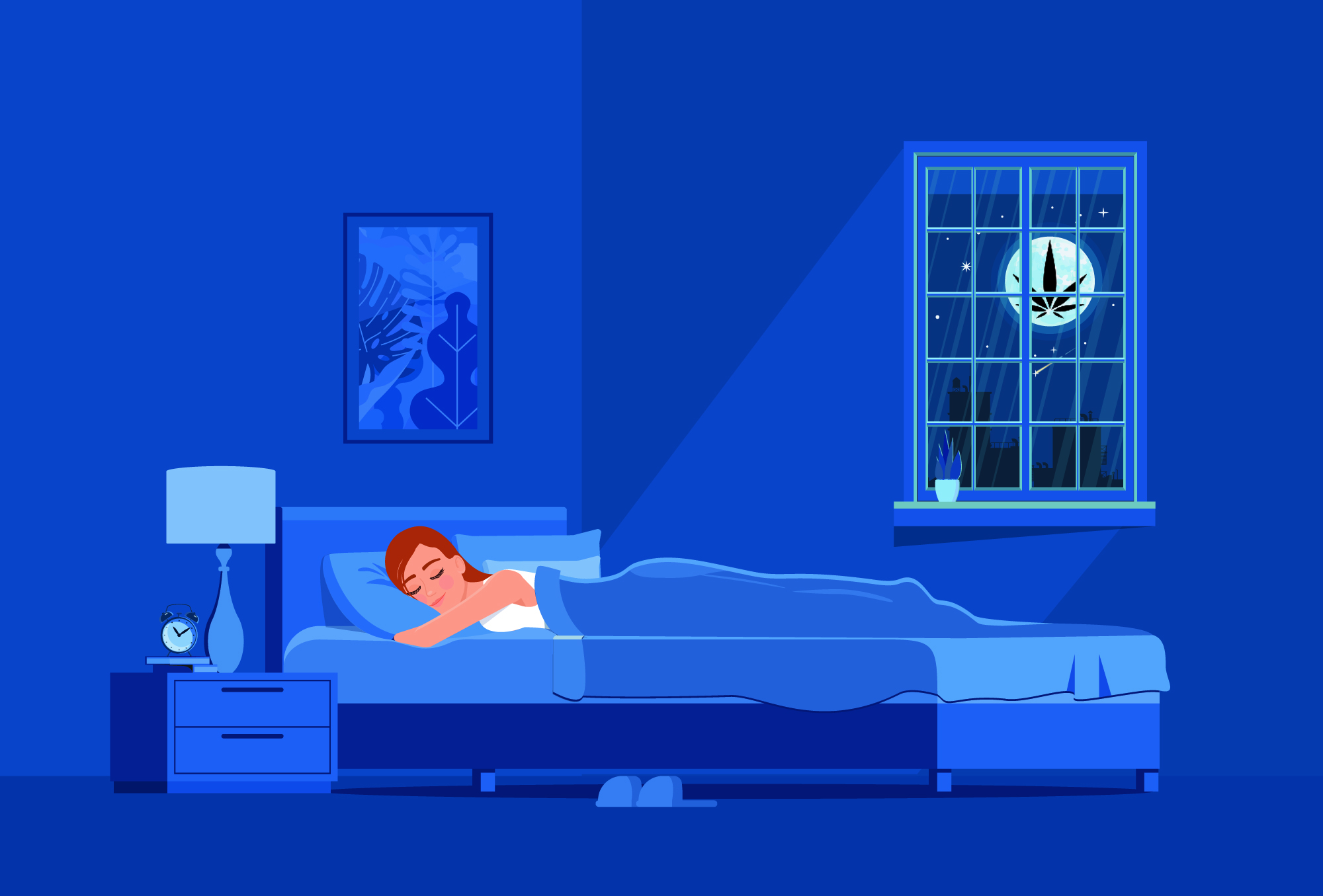 CBD Flower & Sleep: The Science Behind CBD for Insomnia

Before we explore CBD for insomnia, we have to take a closer look at CBD for anxiety. There’s a growing consensus in the medical community that mental issues and sleep disorders are not mutually exclusive. Indeed, many anxiety and insomnia symptoms are incredibly similar (e.g., restless thoughts, poor sleep and muscle tension). Recent research also suggests 40 percent of insomnia patients also have some degree of depression or anxiety.

As you might already know, one of CBD’s main selling points is that it supposedly reduces stress. Since insomnia is closely related to anxiety, it’s understandable why many scientists suggest CBD’s relaxing qualities could help improve sleep quality.

By now, you’re probably wondering if there’s any hard evidence CBD could significantly reduce anxiety symptoms. Interestingly, there are two significant studies out of Brazil and Japan that looked into this issue. In both of these trials, researchers examined the effects of CBD on patients with social anxiety disorder. According to both of these studies, full-spectrum CBD oil seemed to have a positive effect versus placebo pills.

At this point, we don’t know precisely how CBD exerts this calming effect. There is, however, some research out of São Paulo that suggests it might have something to do with the brain.

According to study authors, CBD appears to decrease signaling in the left amygdala and the hypothalamus. These small brain structures play significant roles in regulating emotions and sleep, which could explain CBD’s supposed calming effects.

Amazingly, another São Paulo study suggested CBD might affect the brain’s ability to enter REM sleep. In this study, scientists examined the effects of CBD on patients with Parkinson’s disease. Although this study was small, researchers said patients reported a reduction in nightmares after taking CBD.

Please remember, research into CBD for insomnia is only in its initial stages. Despite this fact, it’s not unreasonable to suggest CBD could induce relaxation by influencing certain brain areas. But to fully understand how CBD makes us tired, we have to take a closer look at the endocannabinoid system (ECS). 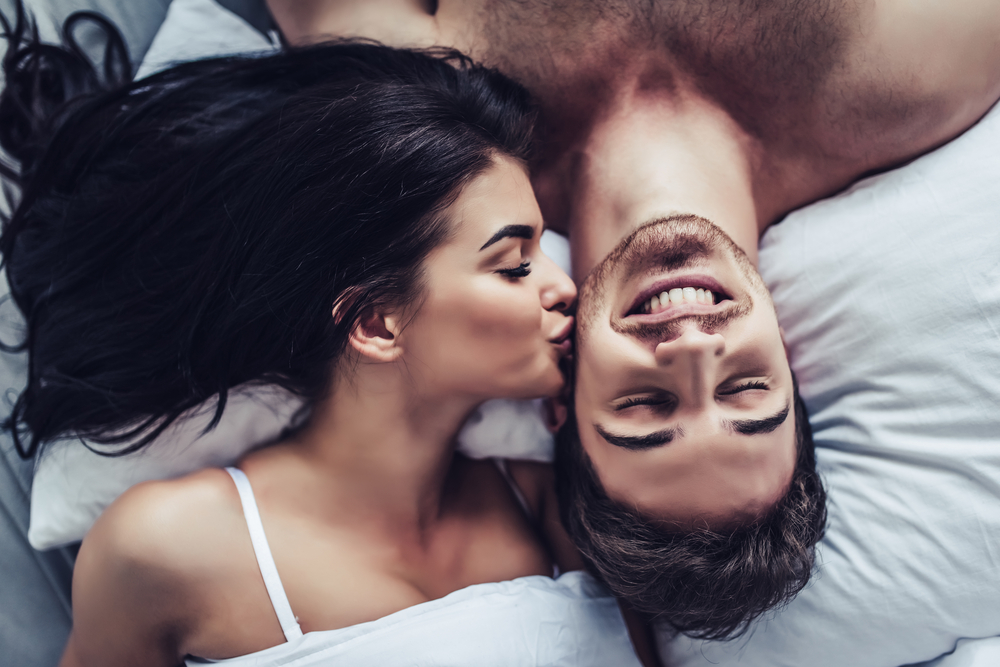 How Does CBD Make You Tired? – A Quick Look At The ECS

OK, so what the heck is the ECS? Basically, the ECS is a biological system that maintains internal homeostasis. In addition to modulating appetite and mood, the ECS seems to play a central role in influencing our immune system, sleep-wake cycle and melatonin production.

Interestingly, our bodies produce endocannabinoids, which are similar to the phytocannabinoids found in cannabis sativa and hemp plants. The human body also appears to have cannabinoid receptor sites throughout the nervous system. When phytocannabinoids like CBD enter our body, they seem to interact with the ECS and promote slight alterations in mood, inflammation, and, of course, sleep.

A few studies suggest CBD could increase the production of an endocannabinoid known as anandamide. One of anandamide’s many potential functions is inducing sleep. In fact, a group of Mexican researchers recently published a paper suggesting increased anandamide caused drowsiness in rats, and could -in theory- help with sleep issues in humans.

CBD Flower vs. CBD Oil For Sleep – Is There A Difference?

Although CBD on its own seems to play a role modulating the sleep cycle, it’s important to distinguish CBD flower from other CBD products. While every product has its pros and cons, CBD flower offers a few unique features that refined CBD goods don’t possess.

Most significantly, CBD flower helps users experience the “entourage effect.” According to recent research from ncbi.nlm.nih.gov, the compounds naturally found in hemp seem to work together to produce a heightened therapeutic effect. So, even if CBD “works” on its own, it might work better when combined with other cannabinoids, terpenes, and flavonoids.

Although the “entourage effect” is hotly contested, many proponents claim that smoking hemp flower has a more potent effect than taking CBD hemp oils, tinctures or capsules. The entourage effect might also help explain why recent data out of New Mexico suggested insomnia patients who smoked cannabis reported a reduction in symptoms.

While CBD always steals the show, it’s important to recognize many other compounds play a significant role in hemp flower. Indeed, aromatic terpenes and other cannabinoids could significantly alter your hemp smoking experience. If you’re looking for a CBD flower that helps with sleep, you should research secondary compounds in third-party lab reports.

For instance, many testimonials suggest the cannabinoid CBN could induce sleepiness. This makes sense when you consider CBN shares a similar structure with CBD. In fact, scientists now suggest CBN-A is the parent of the CBD we all know and love. Although we don’t know much about CBN’s potential, anecdotal reports indicate strains with higher CBN levels have more significant sedative potential.

It’s also important to note that compounds known as terpenes might influence how a hemp strain tastes and makes you feel. For instance, some studies suggest the fruity terpene myrcene has sedative potential. Other research papers show the floral terpene linalool might induce sleepiness in rats. Be sure to keep these compounds in mind when exploring different CBD flowers and gummies. 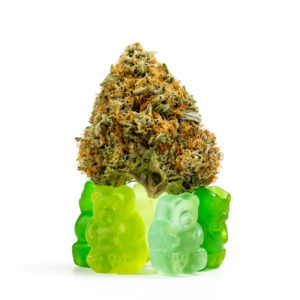 What Are The Best CBD Flower Strains For Sleep?

Now that you know a bit about the use of CBD for sleep problems and the entourage effect, you’re probably wondering which CBD flower works best. To help you on your quest for a sublime sleepy-time smoke, let’s review a few popular choices in our catalog.

Kush strains have an infamous reputation in the cannabis industry for inducing couchlock sedation. So, it should come as no surprise that the high-CBD version of OG Kush has a similar—but non-psychoactive—effect on users.

As a bonus, this indica-heavy hybrid boasts exceptionally high concentrations of the terpene beta-caryophyllene. Recent studies suggest this spicy terpene might have anti-inflammatory potential, which could help chronic pain patients get a good night’s sleep. 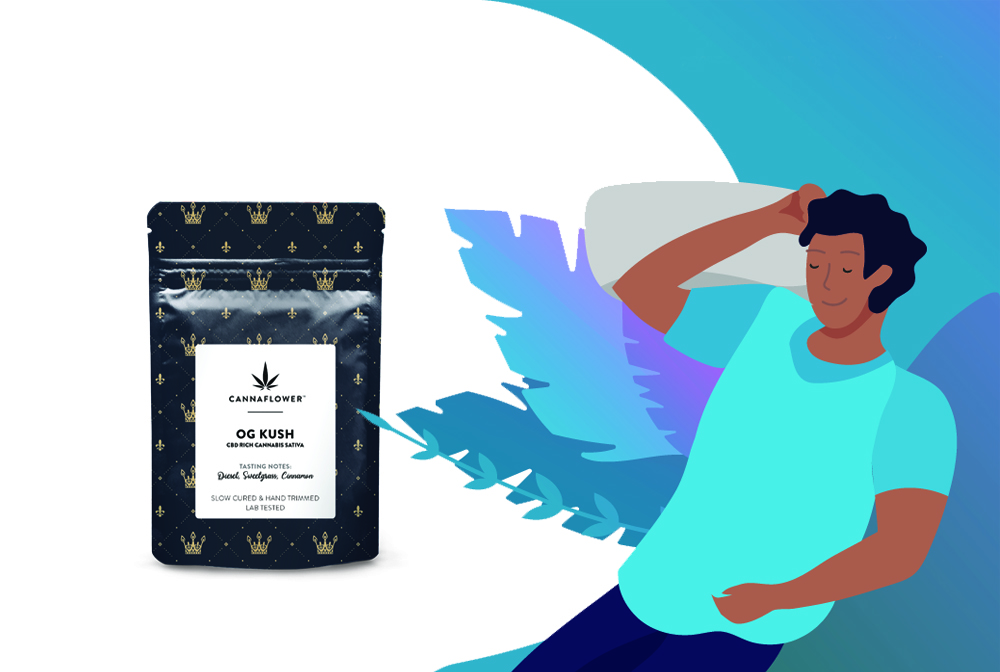 Another nighttime strain in the Kush lineage is the 100 percent indica Bubba Kush. Originating in the Hindu Kush mountain range, our Bubba Kush provides all of the original strain’s relaxation with no more than 0.3 percent tetrahydrocannabinol (THC), the psychoactive compound found in cannabis plants.

Users typically describe Bubba Kush as having a slightly sweet and woodsy aroma thanks to traces of myrcene and alpha-pinene. You might also notice a hint of citrus flavor from the terpene limonene. Definitely pick up this dessert strain if you want a complex terpene profile with reliably potent indica effects. 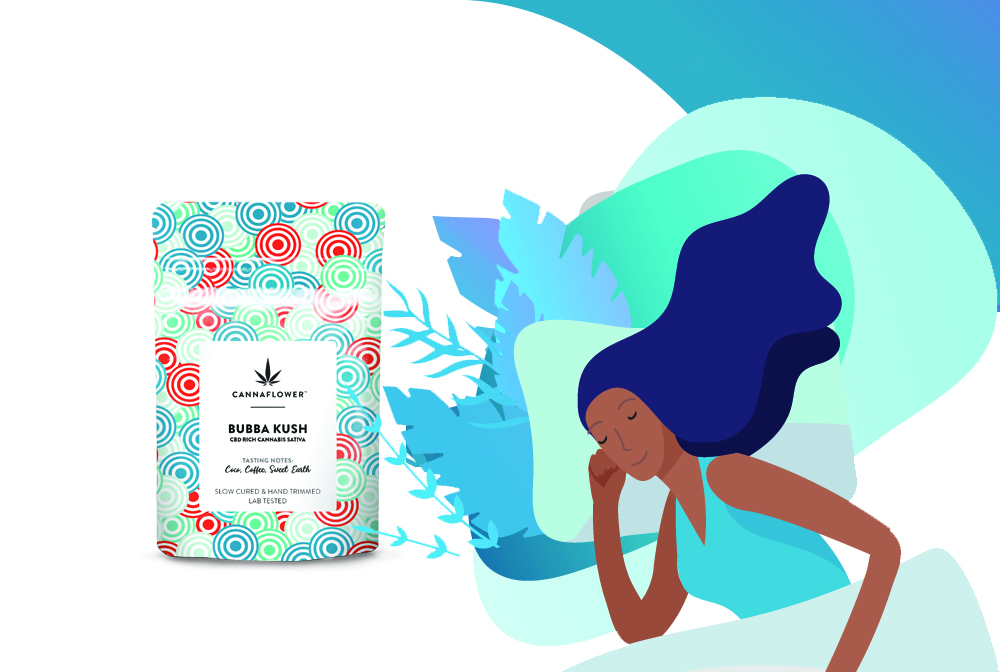 While CBD shows phenomenal potential as a sleep aid, this cannabinoid seems to work best in conjunction with other doctor-approved relaxation techniques. For example, scientists strongly suggest turning off electronic screens at least 30 minutes before bed could “reset” our circadian rhythm. It’s also well known that regular exercise has multiple health benefits and could significantly enhance sleep quality, without any notable side effects even in higher doses.

If you’re one of the many people having trouble sleeping for the recommended seven hours per night, consider adding high-quality CBD to a healthy nighttime regimen. If you have any questions about choosing the best CBD hemp flower for your needs, never hesitate to reach out to our team at [email protected] 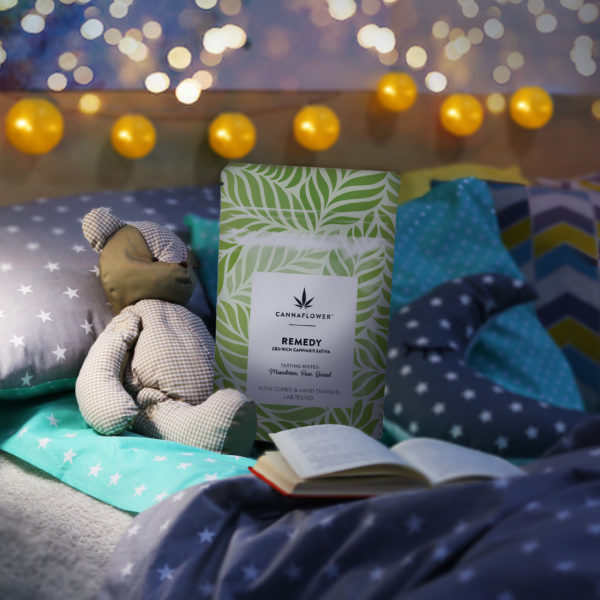