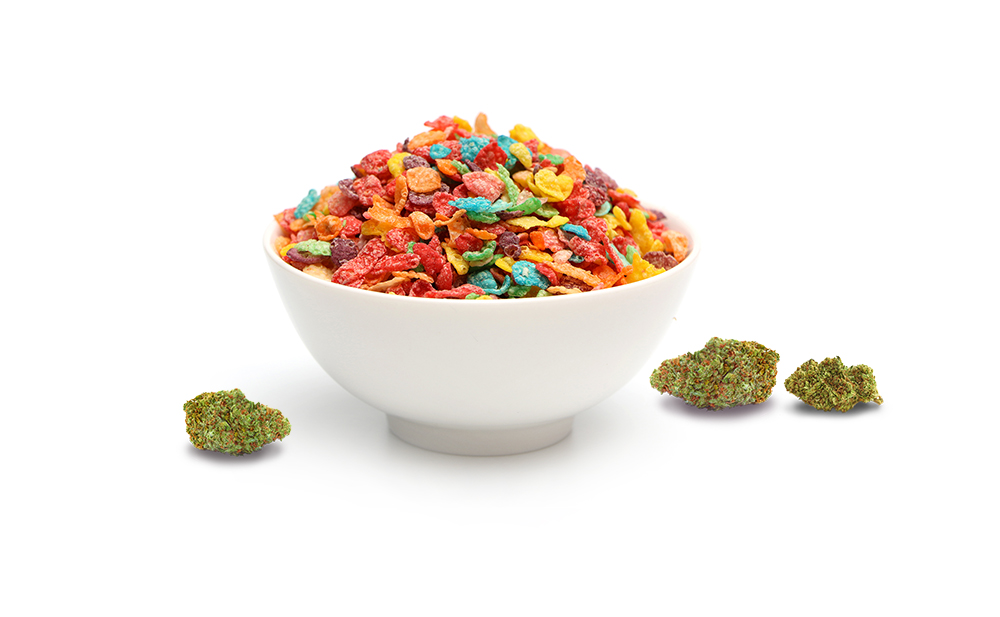 Fruity Pebbles cereal may be an affordable treat, but the Fruity Pebbles strain is an expensive smoking experience. Often abbreviated FPOG, Fruity Pebbles was once the priciest “luxury strain” in the North American cannabis market. Impressively, when this sugary strain appeared in California, potheads were willing to pay $1,500 per FPOG seed. While prices have come down recently, Fruity Pebbles remains a highly desired hybrid amongst elite cannasseurs.

• A mix of Green Ribbon, Granddaddy Purple, and Tahoe Alien.

Fruity Pebbles isn’t Alien Genetics’ only successful strain, but it remains this Cali seed bank’s most profitable creation. Partly, this had to do with FPOG’s exclusivity. The team at Alien Genetics only released a limited batch of this strain in 2006. However, just because this strain was rare doesn’t explain its ultra-high price tag. Many cannabis fans were drawn to this strain out of a deep sense of nostalgia.

As the name highlights, Fruity Pebbles is meant to mimic the famous Post cereal brand. Not only does this strain have sweet fruity terpenes, it has rainbow-colored pistils, purple flowers, and sugary white trichomes—all of which remind tokers of the colorful Flintstones cereal.

Breeders achieved this award-winning genotype by mixing the legendary Granddaddy Purps with Green Ribbon and Tahoe Alien. These three parent strains give FPOG a slight indica edge with average THC concentrations of around 20 percent. However, there’s usually ≤ 1 percent CBD in Fruity Pebbles cultivars.
Given FPOG’s extreme THC content, it’s not a suitable choice for new tokers. If you’ve never had marijuana before, you should concentrate on legal, low-THC hemp hybrids. Cannaflower has plenty of artisan-grade hemp nugs that resemble Fruity Pebbles’ aromatics without the high-inducing THC buzz.

Does The Fruity Pebbles Strain Taste Like The Cereal?

For 99.9 percent of customers, Fruity Pebbles is all about the flavor. While this strain has soothing effects, most people are only interested in FPOG’s fascinating blend of sweet aromatics.

Unsurprisingly, this strain mimics its namesake cereal with loud sugary terpenes. Most likely, tokers will pick up pungent tropical notes along with hints of cherry, berry, and citrus. While some FPOG cultivars have hashy undertones, the spice isn’t as strong as direct Kush descendants.

Tokers should treat Fruity Pebbles as a standard indica hybrid. Although some reports suggest FPOG has a 50/50 indica-to-sativa ratio, it’s more likely this strain will make you feel chill rather than “thrilled.” Fruity Pebbles isn’t as couchlock sedating as other indicas, but most users claim they feel a pronounced body buzz and a slightly unfocused “high.”

Customers should only use Fruity Pebbles at night when they don’t have any pressing demands. However, since Fruity Pebbles has sativa genetics, you probably won’t fall asleep minutes after taking a hit of this hybrid. Indeed, many FPOG fans claim they have enough energy for activities like chatting with friends, listening to music, or streaming one of their favorite shows.

Not only is FPOG too expensive for most new tokers, it’s also well above their potency limits. The average THC in Fruity Pebbles is high enough to provoke adverse reactions, especially if you have no THC tolerance.

There are, however, plenty of low-THC alternatives in the artisanal hemp flower market. For instance, Cannaflower now offers fruit-forward CBD cultivars like Cherry Wine, Orange Glaze, and Berry Cobbler. Each of these strains delivers a sweet flavor experience reminiscent of FPOG, but without high traces of delta-9 THC.
Please click this link for more details on Cannaflower’s dozens of CBD hemp flowers.