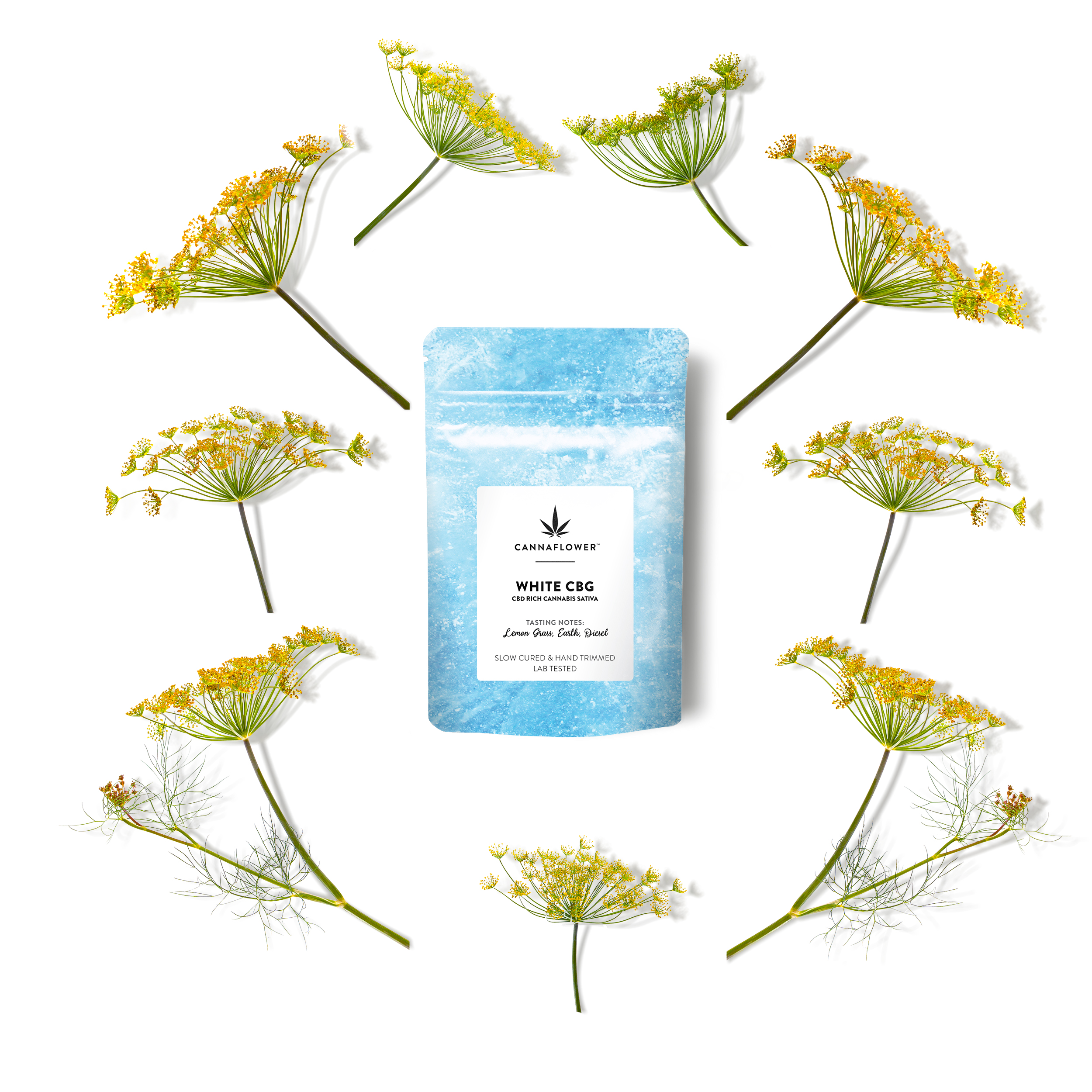 White CBG is not a CBD hemp flower strain. If you have questions about the differences between CBG and CBD, the first section of this review will familiarize you with CBG. it might be best to start here, but if you are already familiar with cannabigerol, you can skip the next two sections to continue with the review itself:

If you’ve come to the Cannaflower™ website, odds are you are familiar with cannabis and have an understanding of terms like THC, CBD, and their differences. What is less widely well known and understood is CBG, or ‘cannabigerol’.

Cannabigerol (CBG) is another cannabinoid, just like tetrahydrocannabinol (THC) and cannabidiol (CBD). (Read that word one more time, it’s not a compound version of ‘Cannabid Oil.’) Unless you are dealing with cannabis strains specifically bred to enhance CBG content, most strains contain lower levels of CBG than they do CBD and THC. While CBG exists at lower levels, it is in fact the chemical precursor to both THC and CBD. Cannabigerolic acid (CBGA) is what forms prior to tetrahydrocannabinolic acid (THCA) and cannabidolic acid (CBDA).

In layman’s terms; CBG is the ‘mommy’ of THC and CBD. Without no CBG, there ain’t no THC or CBD. Enzymes within cannabis strains are synthesized and either turn the majority of CBG acid into THC acid or CBD acid.

To avoid the majority of GBGA immediately getting converted to CBDA and THCA requires extensive cross breeding of hemp strains and genetic manipulations. Cannaflower™’s White CBG strain is a result of such cultivation. When cultivators are attempting to grow a CBG crop, this means they have to harvest early; giving the strain less time to convert into other cannabinoids like CBD and THC. It is a very difficult, and costly strain to produce. That’s why some have come to call it “The Rolls Royce of Cannabinoids.” 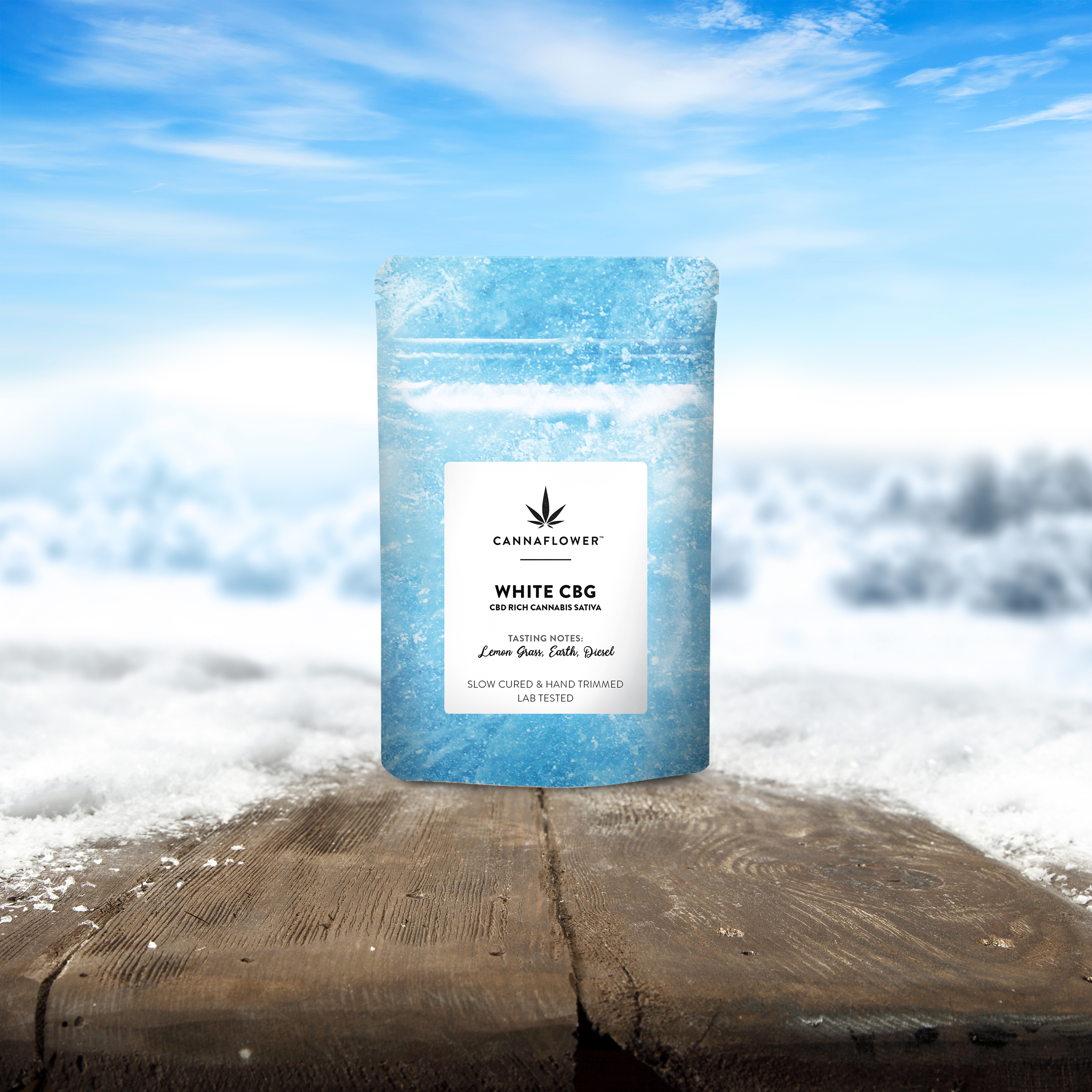 Neither CBD nor CBG have the psychoactive elements of THC. Both CBG and CBD interact with the same chemical receptors in the body, and both are believed to have anti-inflammatory, antidepressant, as well as antioxidant effects.

There is a lot more research available on CBD than there is on CBG, however we do know that CBG functions differently than CBD. And despite the fact that CBGA is the precursor to CBD, CBD is entirely distinct from CBG, both in terms of its abundance in cannabis plants, and in terms of its chemical structure. While CBD has primarily indirect interactions with the endocannabinoid system, some studies show that CBG interacts directly onto the endocannabinoid system through the CB1 and CB2 cannabinoid receptors.

Some researchers believe that CBG works as a to mitigate the psychoactive effects of THC on the endocannabinoid system. Like CBD, CBG has the potential to relieve depression and anxiety.

If you’d like a more in-depth look at CBG, you can check out Cannaflower’s Guide to CBG or any of these other sources:

A beginner’s guide to CBG: What is CBG and what does it do?

CBG VS CBD: What are the differences?

What is CBG (cannabigerol) and what does this cannabinoid do?

But enough about the science already, what is this strain actually like?

If you’ve tried several standard CBD strains at this point and are in the market for something wildly different, it might be time to try some White CBG. CBG strains are often recommended to people with low THC tolerance, who want little to no risk of psychoactive effects. CBG contains nearly zero percent THC, making it the safest strain on the market when it comes to avoiding any negative mental states. White CBG received 1st place in the 2019 Oregon Grower’s Cup – a reward that was well earned, since both cultivating and harvesting CBG is incredibly challenging and not for the faint of heart. Smoking White CBG may contain next to no risk of anxiety, but producing it is another matter!

Cultivated by Oregon CBD, White CBG combines several CBG-dominant strains, in order to further hone in on the resin production and terpenes profile. It’s believed that the name may be a nod to the famous, high THC strain ‘The White,’ though it’s uncertain whether White CBG shares any heritage with that particular hemp flower. The name might also simply have been given for the frosted buds that decorate this plant.

Whether in the field or bagged on the shelf, White CBG hemp flower is a show-stopper. White CBG plants grow quickly into full bushes with large ‘grade A’ frosted colas. The frost is so thick on these flowers that you can mistake it for snow or sugar. It’s no wonder that it was named ‘White’ CBG.

Unlike its CBD cousins, the aroma of White CBG buds are not as immediate or overpowering. You can open up a bag of white CBG and not smell much of anything at first. But, give White CBG a day or two to ‘decant’, and you’ll be noticing its unique, subtle scent of sweet cream, diesel, lemon, and earthy notes of grass and pine.

White CBG is Oregon CBD’s highest testing CBG flower, with a CBGa content of 10.14%. The terpenes can vary in this CBG strain, but this particular harvest contains a high amount of the terpene guaiol, known for its anti-inflammatory nature as well as an anti-fungal agent. Guaiol produces the earthy, pine and woodsmoke aromas that are found in White CBG. Guaiol is a rare terpene not typically seen in any amount worth mentioning in our standard CBD strains.

As mentioned previously, the effects of CBG are quite different from anything one experiences from a CBD strain. Moreso than any CBD strain, White CBG contains the lowest possible risk of any negative mental effects – the sort of psychological reactions you might come to expect from an overly aggressive sativa strain. However, White CBG is not considered to be overly sedating. Users have described White CBG as an ‘enlivened calm’, which is something that has been attributed to daytime CBD strains.

Again, it’s very hard to list anything that is similar to White CBG, since we are talking about entirely different plants, but if you’re in the market for some other low-THC hemp flowers, you can’t go wrong with Cherry Wine or Remedy.

A great choice for anyone looking for an enlivened calm from a hemp flower with near zero THC!