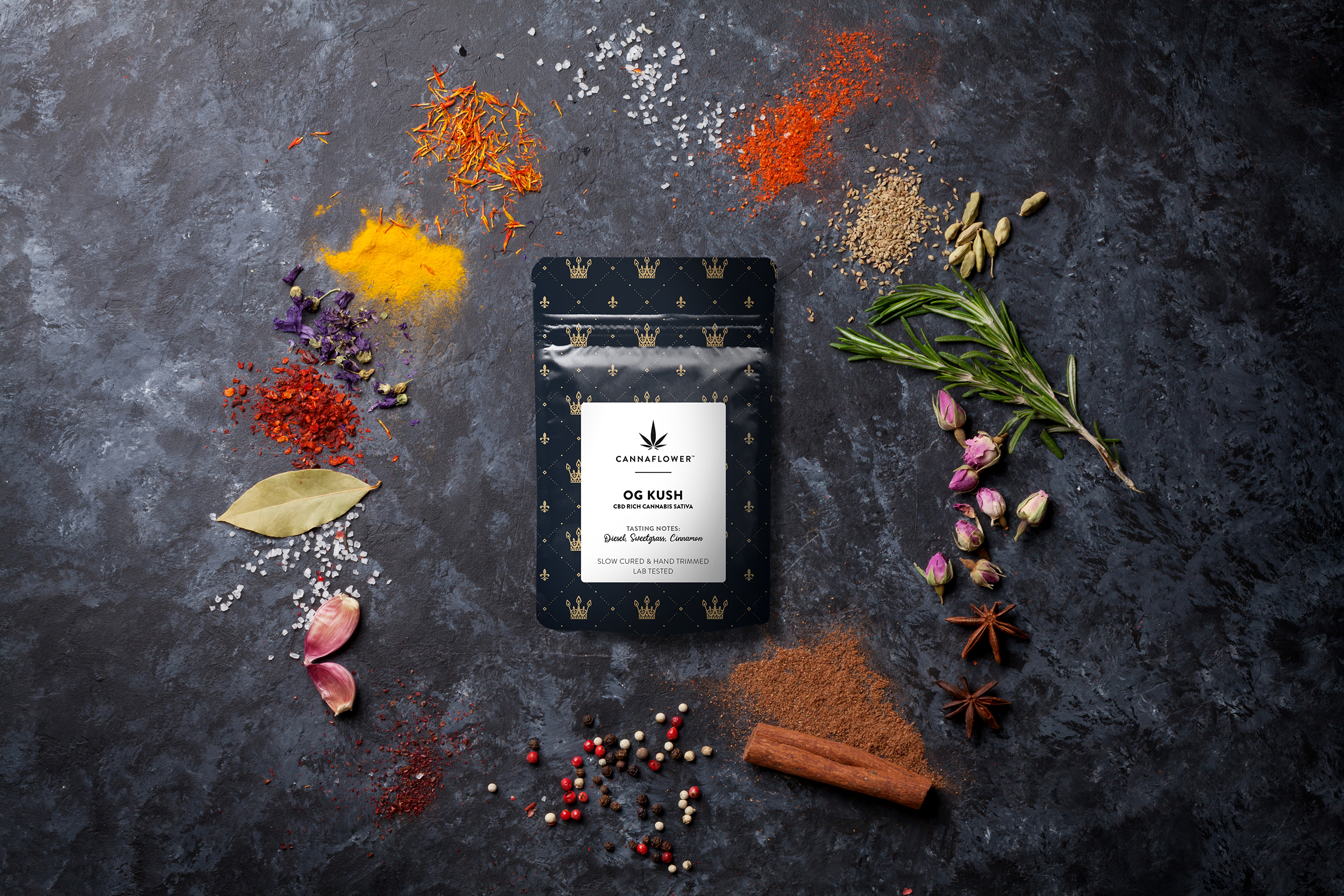 OG Kush is arguably the most popular strain in the United States when it comes to crossbreeding due to its complex aroma, unique terpene profile, and stellar reputation. If you are looking at a CBD strain with ‘Kush’ in the name, odds are pretty high that The OG is its ancestor. This indica-dominant strain (75%/ 25%) is the patriarch and progenitor of countless West Coast strains, (including Cannaflower’s Bubba Kush) and flavor and characteristics have become synonymous with ‘California Cannabis.’

What ‘OG’ was originally meant to stand for is lost to history at this point. One theory claims it’s meant to be ‘Original Gangsta’ – either because it has fathered so many other strains, or because of its origin strain’s popularity amongst numerous rap artists, including Snoop Dogg, throughout the 90s. A second theory states that ‘OG’ stands for ‘Ocean Grown,’ because the strain would come to be grown near the California coast. However, the originating strain was obtained in Florida – another coastal state – so the ‘Ocean Grown’ could just as well be referring back to the Sunshine State where it was originally cultivated.

Regardless of the origin of the name, or the original state where it was cultivated, OG Kush is primarily associated with the West Coast, and is considered the granddaddy of California cannabis. OG Kush was orginially derived by crossing Chem Dawg (a sativa) with Hindu Kush (an indica). Since its inception, it has lent its genetics to numerous west coast strains, such as Ghost OG, Tahoe OG, as well as Cannaflower’s own Bubba Kush, and Legendary. The Florida Cultivator Matt ‘Bubba’ Berger (The namesake for the Bubba Kush strain) was who brought OG Kush to California when he provided the renowned Los Angeles cultivator Del Rosso with the strain. Del Rosso would then bring the OG to fame throughout the West Coast.

Flavor With the most distinct and complex aromas on the market, layered with notes of diesel, sweetgrass, and cinnamon, this strain is very pungent. People looking for ‘subtle’ aromas had best look into a different strain. Both the taste and the aroma will linger for a longer period of time than most hemp flower strains.

The Kush genetics of this plant make it on the shorter side but provide it with dense buds and branches. OG has brass-colored, conical pistils glistening with syrupy trichomes. When flowering the buds take on a bright green glow. OG Kush crops are harvested in October after a growth period of eight weeks.

The fact that this strain is on the shorter side may have as much to do with its popularity amongst growers as its legendary fragrance. Because these plants are so dense, they allow cultivators to receive a high yield without taking up too much space. That being said, cultivating OG Kush is not ideal for a novice. This CBD hemp flower strain is particularly prone to mold, insects, and disease; it requires an experienced hand to bring it to its full maturity.

And growers be warned: if you are attempting to cultivate OG Kush indoors alongside other strains, its fragrance will quickly overwhelm that of its neighboring plants!

Cannaflower’s low THC (just 0.08%), high CBD variation of this classic strain is the perfect strain for anyone looking for the benefits of an indica-dominant strain without risking the side effects associated with high THC such as anxiety and racing thoughts.

Our OG Kush is high in the terpenes Caryophyllene, Humulene, and Myrcene. Secondary terpenes at play in the strain include Linalool, Limonene, and Pinene.

Both Caryophyllene and Myrcene have been associated with anti-inflammatory effects and are why the strain is sought after as a relief from both physical and emotional stress. Humulene supplies OG Kush with its under-notes of spice. It is a common terpene found in hops as well as cannabis and is believed to possess anti-inflammatory properties as well. It is present in numerous medicinal oils that have been in use for hundreds of years.

As an indica-dominant Hybrid, consumers seek out OG Kush for the effects typically associated with classic indicas; feelings of calm relaxation primarily target the body, as opposed the mind – an area more associated with sativa-dominant plants.

OG Kush fans reliably describe a lowering or stress and anxiety, and a sense of deep relaxation. Another somewhat common effect attributed to OG Kush hemp flower is an increase in appetite. Some users suffering from nausea and upset stomach due to undergoing chemotherapy or dealing with conditions like Crohn’s disease appreciate this strain’s ability to help them eat. Given these qualities, OG Kush is a perfect fit to be included in both our Downtime as well as our Rest and Mindfulness Collections.

We mentioned at the start of the review that OG Kush has spread its genes more widely than Genghis Kahn. It should come as no surprise, then, that OG Kush is a progenitor strain to two of Cannaflower’s other popular indica strains, Bubba Kush and Legendary.

A perfect indica-dominant strain to help the mind and body unwind.