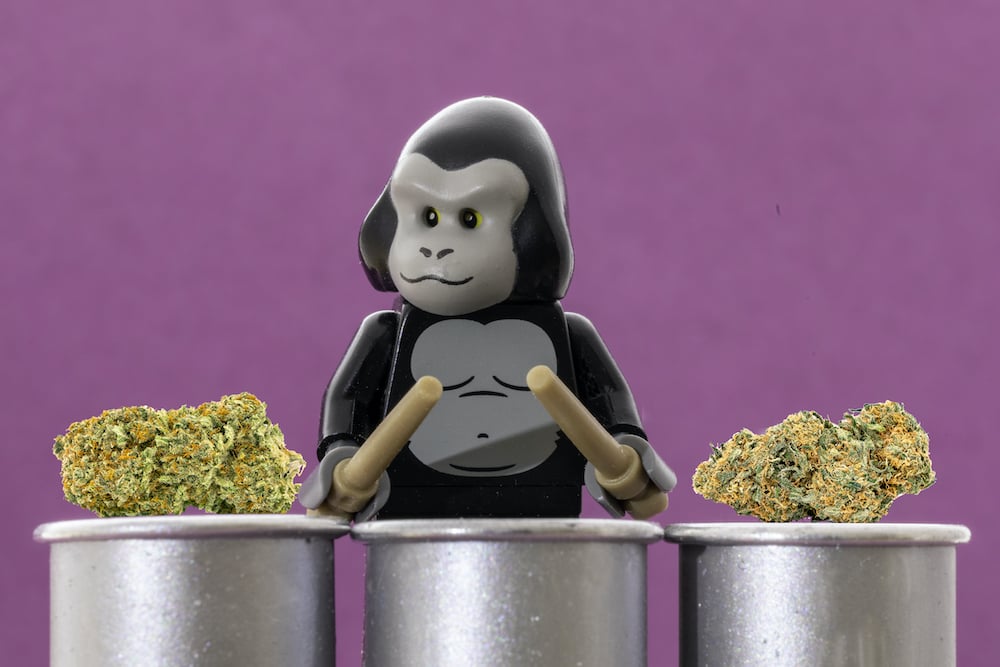 No doubt, there’s a lot of star power behind these ultra-sticky nugs. Anyone who loves diesel strains with an indica edge will understand why so many people are “glued” to GG#4.

Like many famous weed hybrids, Original Gorilla Glue may to be a happy accident. Apparently, a few cannabis breeders accidentally crossed the strains Chem Sis, Sour Dubb, and Chocolate Diesel in their home garden.

GG#4 is indica dominant and has been known to have slightly sedative effects. With its high concentrations of THC, this is not a good choice for beginning tokers. Even people who have experience with indicas may find GG#4’s couchlock properties to be a touch intense. Rather than reaching for GG#4, new smokers may want to experiment with a low-THC indica cultivar. For instance, Cannaflower’s Bubba Kush has similarly relaxing properties without the intense effects of Original Gorilla Glue. You can find out more about how Bubba Kush compares with Gorilla Glue by following this link.

Gorilla Glue flowers should always have gargantuan trichomes. Indeed, this strain was partially named after its “gluey” texture. Often, there are so many white trichomes on these nugs that it’s difficult to make out the dark green flowers underneath.

Gorilla Glue flowers could have shades of dark blue or purple, but you probably won’t notice them under all those white trichomes. While Gorilla Glue’s pistils don’t often steal the show, sometimes there’s a fine assortment of orange hairs on this strain.

Gorilla Glue is “gassy” in a good way. Generally, this strain has heavy traces of the citrus-forward terpene limonene, which gives it an astringent edge. Industrial flavors like gasoline will be in the foreground of Gorilla Glue’s aromatics.

However, GG#4 isn’t just a carbon copy of Sour Diesel. There are subtle earthy notes like pine and woods in the background of this strain. Many users also claim they detect notes of mocha and cocoa as they exhale this hybrid.

What Are Gorilla Glue’s Standard Effects

Gorilla Glue isn’t a 50/50 hybrid, but it has enough sativa to provoke some pretty heady effects. Initially, tokers will feel a head-rush high that gradually transforms into a full-body tingle. These relaxing properties will eventually lead you into a “stoned” and slightly sedated state of mind.

The more Gorilla Glue you take, the more likely you’ll want to curl up and fall asleep. So, yeah, this isn’t the best strain for people who want to be productive. Instead, GG#4 is best reserved for late in the day when you don’t mind feeling an unfocused sense of lethargic contentment.

Original Gorilla Glue is a true “stoner strain.” While it may have the industrial flavors associated with many sativas, this award-winning hybrid always “glues” tokers to the couch. However, since GG#4 has such high THC ratings, it’s not the best call for new tokers. Instead, we’d recommend newbies work their way up to strains like GG#4 with low-THC cultivars. Cannaflower specializes in high-CBD hemp hybrids that have familiar cannabis flavors and ≤ 0.3 percent THC. While these legal strains won’t knock you out, some can help ease you to bed after a rough day. Please check out our entire hemp flower portfolio on this link.